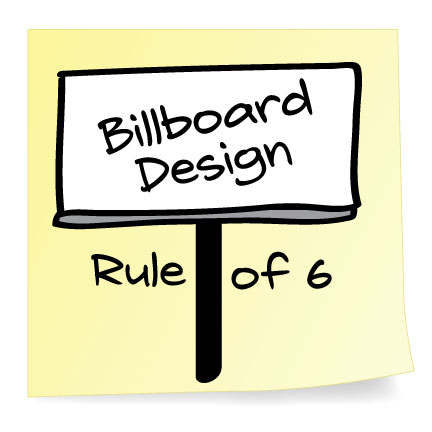 One issue I run into, when designing billboards, is that clients frequently want to use too much text on them. According to various marketing colleagues of mine, and Paul Suggett, a copywriter/creative director, “Six Words or Less is Ideal”, and “Six seconds has been touted as the industry average for reading a billboard”.

I truly believe in those statements, not just as a designer, also a driver and consumer. The next time you’re on the highway, passing by a new billboard, ask yourself how many words you actually read. This is because your eyes will go between watching the road and trying to comprehend a billboard. If there are too many words, do you keep trying to read it, and possibly cause an accident? I would hope that you turn your attention back to the road, then maybe try and catch the rest of it next pass.

Plain and simple, billboards are not magazine ads which you have lots of time to read. A driver typically has less than 6 seconds to read a billboard, dissect all the words and images, and understand the meaning of it. Anything a driver would need more than 6 seconds to read, or would have to write down, such as a phone number, leave it out. 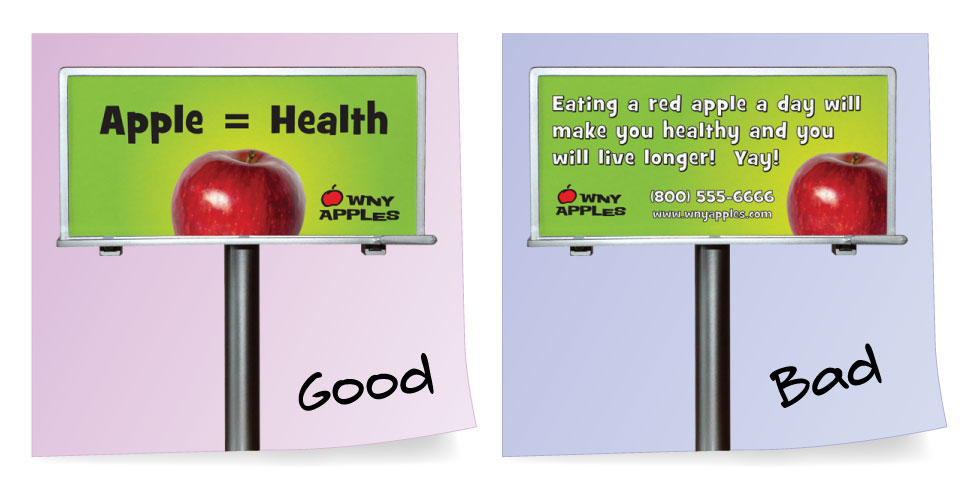 I also recommend keeping a consistent style with your billboards, such as placement of logo, colors, and fonts. Try not to get fancy with fonts or effects as it will make it harder to read. Once drivers get used to a consistent “style”, the company and logo will be one less thing they will need to comprehend, thus your “message” will come across much-much faster to them.

If you keep the “Rule of 6” in mind, when giving your designer text content for a billboard, your billboard will be more successful. It will be more easily read, and more memorable.

To see examples of billboards I designed, click the link http://kfundalinski.com/portfolio/billboards/